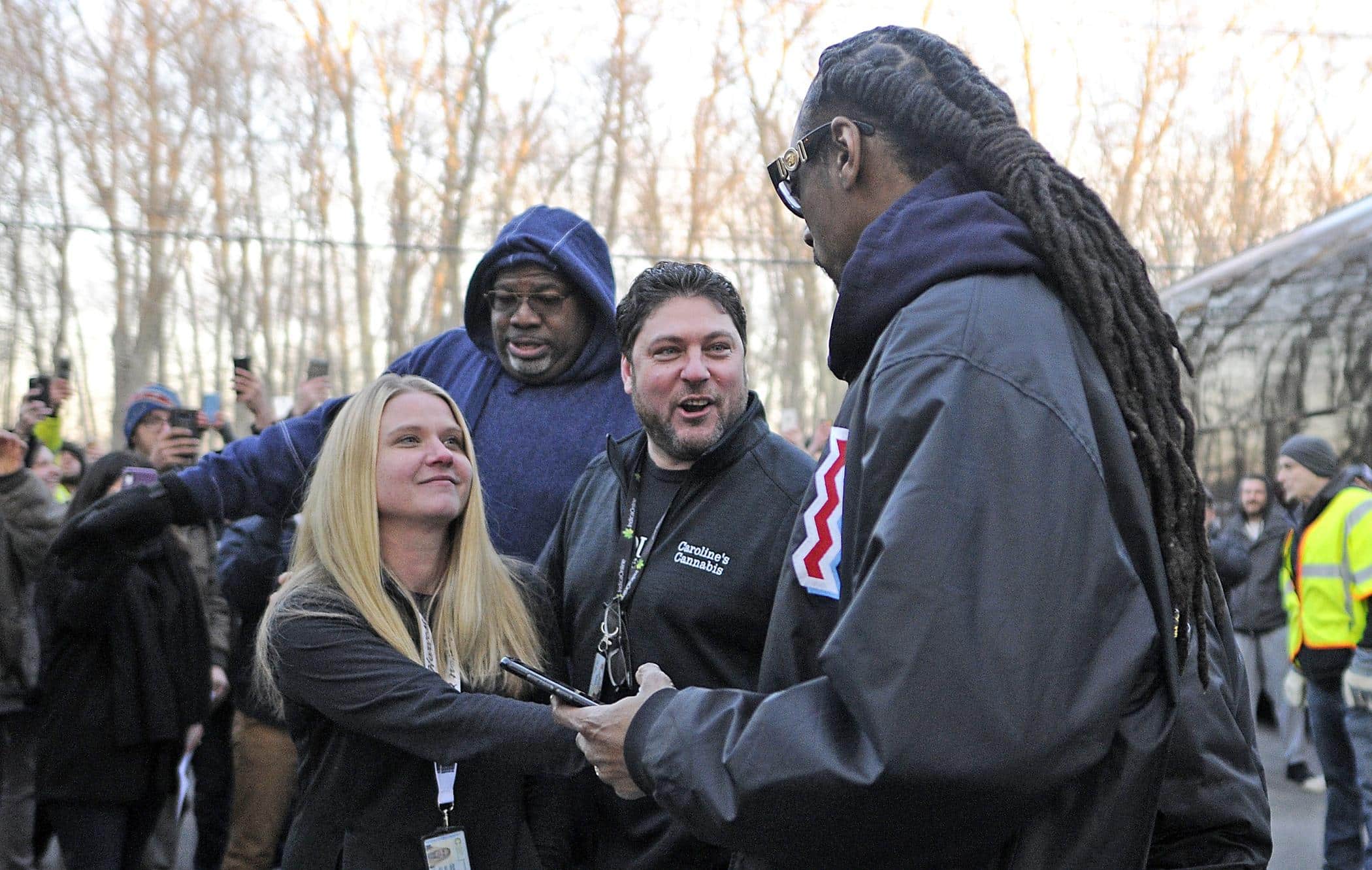 Rapper Snoop Dogg is also a cannabis entrepreneur, having launched Leafs By Snoop in Denver in 2015 – the first major celebrity to brand and market a line of legal marijuana products.

UXBRIDGE – A little bit of Southern California cool made its way to this former mill town of 14,000 in the Blackstone Valley on Tuesday when rapper and Long Beach, California, native Snoop Dogg paid a visit to Caroline’s Cannabis.

More than 250 people stood in the 20-degree chill outside the small marijuana shop at the rear of an industrial complex, well before Snoop’s scheduled 4 p.m. arrival, hoping to get a chance to meet their idol.

Snoop, 48, whose real name is Calvin Cordozar Broadus Jr., is on tour for his 17th solo album, “I Wanna Thank Me,” released in 2019. His laid-back sound and signature throaty vocals, which brought him 17 Grammy nominations and plenty of top hits, were only part of what made him a star to the cannabis enthusiasts waiting in line.

Snoop is also a cannabis entrepreneur, having launched Leafs By Snoop in Denver in 2015, as the first major celebrity to brand and market a line of legal marijuana products.

The brand, which is distributed in Canada in partnership with Canopy Growth Corp., became the subject of intellectual property and trademark lawsuits in 2019 by the Toronto Maple Leafs hockey team, because of similar logo designs, among other issues, news outlets have reported.

“He’s the O.G., the Original Gangster, of weed,” said John Cabral, 25, of Hudson, who was waiting in line with a large plastic inflated marijuana joint he hoped to have Snoop sign. “OG” is also one of Snoop’s songs and the name of a marijuana strain.

Snoop’s music means “smoking weed freely and not feeling bad about it,” to Kyle Camyre, 36, a DJ from Palmer, who was waiting in line with his fiancée, Sarah MacKay, 42, from Southampton.

We are celebrating women who have made a significant impact on our world. Please join us by nominating an inspiring American woman for our Women of the Century series.

The couple recently got engaged. Camyre held a green posterboard sign that said, “She Said ‘Fo Shizzle,’ ” using Snoop’s slang term for “for sure.” They hoped Snoop would sign it, as well as pose with them for what would be their engagement picture.

Aly, 25, from Grafton, who didn’t want her last name used, agreed that Snoop was bringing some OG cool to this usually quiet area.

“It’s kind of cool that a big name is coming to a small town,” she said.

“Snoop Dogg picked our town,” Andrea Mercer, 37, of Uxbridge said cheerfully, even though she had been standing outside for an hour. “It’s great to bring that to our community.”

Caroline Frankel, owner of Caroline’s Cannabis, which became the 11th adult-use marijuana retail store in the state when it opened last March, said the appearance by Snoop came through a connection with one of her regular customers, Ky Edwards of 1KG Brand Management.

“I think he likes supporting small-business owners,” Frankel said about Snoop, as she prepared to usher small groups, a few people at a time, into the cozy shop for a photo and a meet-and-greet.

“To be part of this little event is incredible. I’m flattered,” she said.

The Daily News’s 2019 Most interesting people

The event was “really a day for the customers,” according to Frankel.

Meeting and greeting were brief as customers and fans filed through, but people came out of the shop happy.

“He was awesome. He was unbelievable, so sweet,” said Jen White, 40, of Uxbridge.

White was with Sandra Horan, 51, also of Uxbridge, who put in a plug for Caroline’s Cannabis as well. “I’m a regular. Caroline’s awesome,” Horan said.

Lisa Diotte, 43, of Douglas, said she “just gave him a big old hug, got a picture. He smells great.”

“He’s great. He’s a big person for the community,” said Otto Ovalle, 25, of Woonsocket, Rhode Island, as he departed the store.

The event had been scheduled for just one hour, but shortly after 5 p.m., an hour after he arrived, Snoop started what was billed as a half-hour set, but actually was longer, spinning tunes as DJ Snoopadellic.

The crowd danced and partied in the now-dark parking lot while tunes blasted from speakers.

“Caroline likes to party all the time,” Snoop said over the broadcast system, referring to lyrics of a song in his playlist. “It’s my kind of spot.”