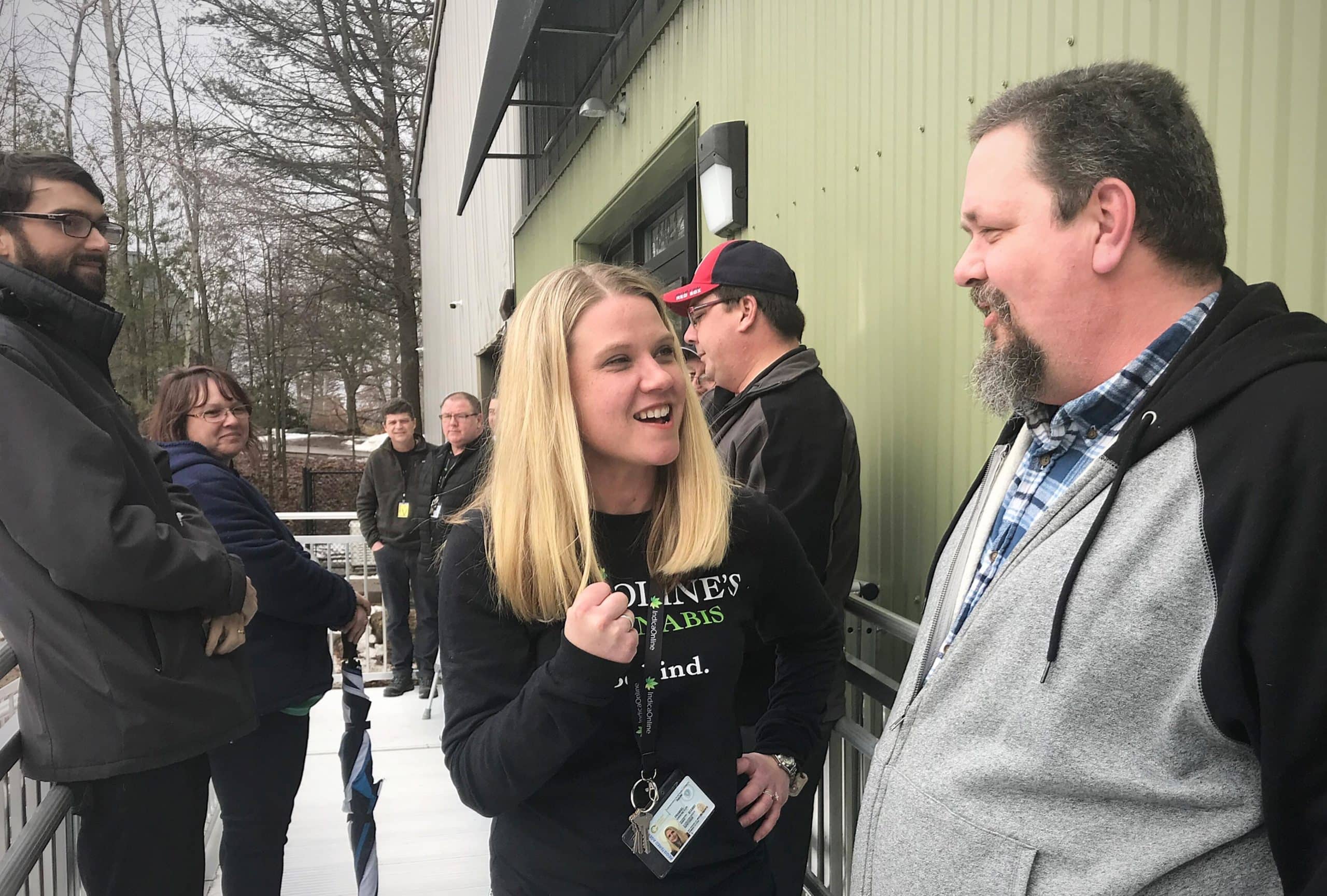 UXBRIDGE — The wait was worth it for the state’s first woman-owned, small-business marijuana retailer to open, and for the several dozen eager customers in line more than an hour before the 11 a.m. grand opening Friday.

As the moment approached, Caroline Frankel stepped out of Caroline’s Cannabis, 640 Douglas St., and shouted a hearty, “Welcome, my cannabis enthusiasts!”

Frankel, whose shop is the 11th in the state selling adult-use marijuana, described how far she’d come from six years ago, when she started as “a woman in her basement with a laptop, a book of regulations and her dreams.”

Breaking barriers isn’t new to the woman who worked during college as the first female valet on Federal Hill, a traditionally Italian restaurant section of Providence, Rhode Island.

Fitting in business plans and navigating regulations in between family activities, Frankel created a marijuana shop that is also part gift shop.

Besides a curated assortment of marijuana products, including salves, edibles and ointments, handmade rustic wooden signs for sale proclaim such sentiments as “Grassachusetts” and “Weed & Reap.”

Kushkards cannabis greeting cards, placed in a rack in the front corner of the cozy store, let enthusiasts share messages such as, “All I weed is you,” and “High love you.”

“Creating a positive presence in Uxbridge has been very important to me,” Frankel told the crowd.

She hoped that clean, safe marijuana retail shops such as hers would eliminate the need for the black market.

And she hoped that an orderly legal market would break down stigma about marijuana.

“We’re here to change the negative social views toward cannabis users,” she said, encouraging customers to “educate before (they) recreate,” and use responsibly.

After the ceremonial ribbon was cut, the first four customers were allowed inside. Driver’s licenses were scanned for age verification and customers lined up at one of the three counter stations to make their selection.

William Luzier of Allston, a former state assistant attorney general and campaign manager for the Massachusetts Campaign to Regulate Marijuana Like Alcohol, made the first purchase.

He plunked down $175.20, cash, for an eighth of an ounce of Apollo 11 cannabis flower, a THC chocolate bar and a bottle of MXR Propel tincture.

They exited to applause from the customers in line outside.

Pineau said she came to support Frankel as a model leader of women-owned small businesses. And to buy some marijuana.

“I’m inspired every day by her tenacity,” Pineau said.

“It’s exciting to see mom-and-pop businesses. It’s very challenging,” she said. “You listen to your passion, and you forge ahead. Small business can make it in this industry.”

Frankel’s lawyer, Nicholas Obolensky, from Providence, works with small marijuana businesses in several New England states. He said he was able to help Ms. Frankel keep legal costs down because she could do a lot of the work on her own.

“I adapt to their level of sophistication,” he said.

Caroline’s first customers also seemed to be experienced with marijuana.

A good number appeared to be middle-aged or older, which didn’t surprise Frankel or customers.

Residents of a 55+ housing development down the street were calling all week, inquiring when it would be open, Frankel said.

Peter Bernard of Taunton, executive director of the Massachusetts Grower Advocacy Council, said the 55-and-older age group is the fastest growing segment of the cannabis market.

“There’s so many benefits for people our age,” said Ellen Moore, 57, of Holliston, noting that alcohol affects people more strongly and causes more problems as they age.

Moore was at Caroline’s to buy medical marijuana for her fibromyalgia and chronic fatigue, as well as to buy salve for a friend. She is a director and treasurer of the Grower Advocacy Council.

Bernard said he was happy to see another retailer open to serve both medical and recreational users.

“We’re here today because cultivators and manufacturers need places like this. They need retail sales,” he said.

Uxbridge Police Chief Marc Montminy was on hand with other town officials and seemed pleased with the orderly crowd.

“I hope that the cannabis tourism that occurred in Leicester has declined,” he said before the opening, but he expected the first few days would have enormous activity.

Montminy also expected to see an influx of vehicles from out of state. Rhode Island is a few miles away, and Connecticut isn’t much farther. Adult-use marijuana is not legal in Rhode Island or Connecticut. But by noon Friday, there were just a handful of Rhode Island plates in the off-site parking lot.

“I think it’s a good start for the industry,” said Selectman Jeffrey Shaw. “It’s nice that Uxbridge is in the forefront.”